SportPix researchers collected over 3,000 photos of the Super Bowl and the NCAA Men’s basketball championship from 16 different news outlets.

The chart below compares the amount of photographic coverage of the 2013 championships of six major media outlets. 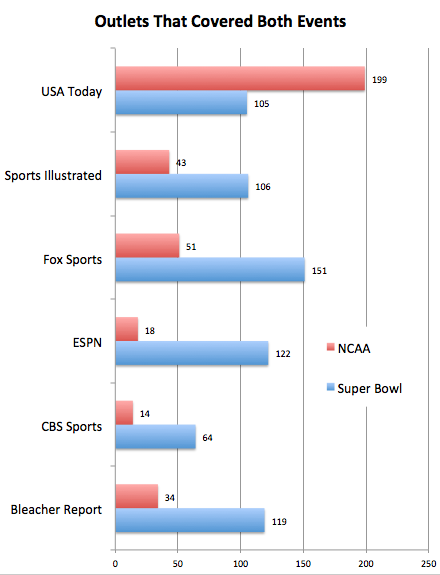 The numbers to the right of the bars represent the number of photographs researchers found and pinned* of the two games.

Across these six outlets, the Super Bowl received significantly more coverage than the NCAA Championship.

Note the great disparity in the simple amount of coverage of the two games — especially in the five sports-centric news outlets.

Only USA Today — the single historically print newspaper in this list — ran more coverage of the college basketball championship game.

* NB:  The total number of photos pinned to Pinterest during both the Super Bowl and NCAA championship game is  3,274.

Note that the total listed at the top of the SportPix Pinterest homepage is a subset of that number.  That pin count reflects only the number of pins added directly through the ICMPA Research account and does not include pins from researchers on group boards.