Heavy coverage of Beyoncé’s Super Bowl halftime performance across the 10 sports outlets studied suggested that the halftime entertainment may be just as important to audiences as the game itself.

Scroll down for highlights of the Super Bowl’s halftime coverage.

The Super Bowl is not just a sporting event but a cultural phenomenon. Those who normally do not watch or follow NFL football tune in to watch multimillion-dollar commercials and the Pepsi-sponsored halftime show. In 2013, Beyonce՛performed during the coveted halftime slot in what commentators argued was one of the best halftime shows in recent history.

News outlets featured Beyoncé in more photos and mentioned her in more captions more than any other person during their Super Bowl coverage.

Researchers found that Beyoncé appeared in more captions than the quarterbacks of both teams combined. Photos pinned to the halftime board were far more likely to have a caption than photos taken at other points in the game.

From all angles, sports sites went for the flattering and sexy.  – Ezra Shaw/Getty Images, msn.foxsports.com

Despite the favorable portrayal of Beyoncé’s Super Bowl performance on sports websites,  unflattering photos of Beyoncé made waves on non-sports related outlets. 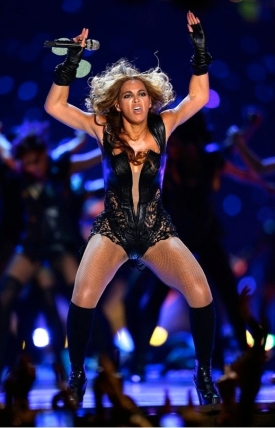 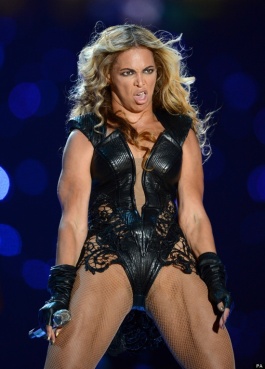 Although researchers did not formally evaluate entertainment media’s coverage of the Super Bowl, they did note that many non-sports sites covered the game and especially the halftime show.  Researchers did note — as did many media commentators — that entertainment media sites often posted unflattering photos of Beyoncé that captured her in odd action shots — between movements looking “overly” muscular or with a strange look on her face.

Those “negative” photos became a story in themselves in part because Beyoncé’s publicist asked many outlets to not print or use the photos. (See the letter from Beyoncé’s publicist here, via BuzzFeed) The use of the negative photos and the resulting attention they received, caused Beyoncé and her team to severely limit photographers’ access to her performances.

A few of the negative photos that caused a commotion on the Web can be found here.

It is fair to note, however, that the number of photographs collected for any given site is a rough indication of the commitment of that site to photographically covering the specific event.

In evaluating photos of Beyoncé researchers chose to examine the photos coded as Halftime photos where she is pictured either alone or with others. It is possible photos of Beyoncé appeared on other boards but if so they were very few and would not have skewed the results outlined above.