COVERAGE of the NCAA CHAMPIONSHIP GAME

This page provides a summary of research results for SB Nation’s photographic coverage of the final game of the NCAA March Madness tournament.

During the 2013 final game of the NCAA’s March Madness tournament, SB Nation ran rather limited photo and video coverage, compared to some of its competitor sports outlets.  SB Nation, did, of course however, dedicate specific blogs to the Cardinals and the Wolverines to serve its network of fan communities —  Maine N Brew for the Michigan Wolverines and Card Chronicle for the Louisville Cardinals. These blogs served as the main venues for SB Nation’s pre-game, game and post-game coverage.

Jordan Morgan #52 of the Michigan Wolverines falls to the court after he attempted a shot against Montrezl Harrell #24 and Luke Hancock #11 of the Louisville Cardinals during the 2013 NCAA Men’s Final Four Championship at the Georgia Dome on April 8, 2013 in Atlanta, Georgia.–Andy Lyons/Getty Images

Overall, researchers pinned* 73 photos from SB Nation the night of and day after the NCAA Championship.  Even though SB Nation dedicated specific blogs to each team, they reran multiple photos (often taken by USA Today photographers) for different posts on their homepage. 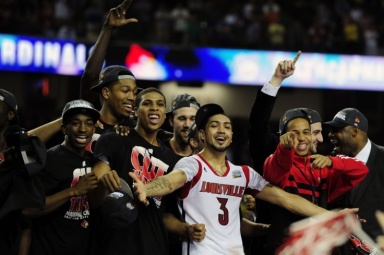 These images from SB Nation are a sampling of its photo coverage of the NCAA Men’s Basketball Championship. Clicking a photo links to the Pinterest board of that photo.

SB Nation emphasized the post-game awards and celebrations in its coverage of the NCAA final game.

CONTEXT: SB Nation, owned by Vox Media, re-launched in 2012 as the largest sports blogging network “created by fans for fans,” with over 310 sites that are devoted to an individual team, sport or league. SB Nation reaches 20 million unique visitors per month. According to SB Nation, it covers every major pro and college program in the U.S. and Canada as well as Nascar, MMA and Golf.

It is fair to note, however, that the number of photographs of either game collected for any given site is a rough indication of the commitment of that site to photographically covering that specific candidate.